Our Foundation was proud to be invited to particiate in GARMA this year, Australia's leading cultural festival run by the Yothu Yindi Foundation at Guikula, a traditional meeting ground in Arnhem land.  Garma 2013, Garma'wu Buku_lunthurra (getting people together) marked the 50th Anniversary of the Yirrkala Bark Petition and the key forum addressed Australia's journey to reconciliation with some lively speakers including Noel Pearson, Marcia Langton, Tony Abbott, Jenny Macklin, Mr. Adam Giles MLA, Chief Minister of the Northern Territory and Senator Nigel Scullion.

At the festival opening, Jack Thompson announced the Yolngu Heroes, men, women and students who had distinguished themselves in the eyes of the community. Through the generous donation of HarperCollins, our Foundation provided each hero with a Gurrumul Yunupingu book prize.

Our ambassadors Alison Lester and Felix Reibl were invited to run workshops for The Stronger Futures Youth Forum, which aimed to encourage and inspire Yolngu and Balanda students from all over the country.

Writing and illustrating at the Youth Forum 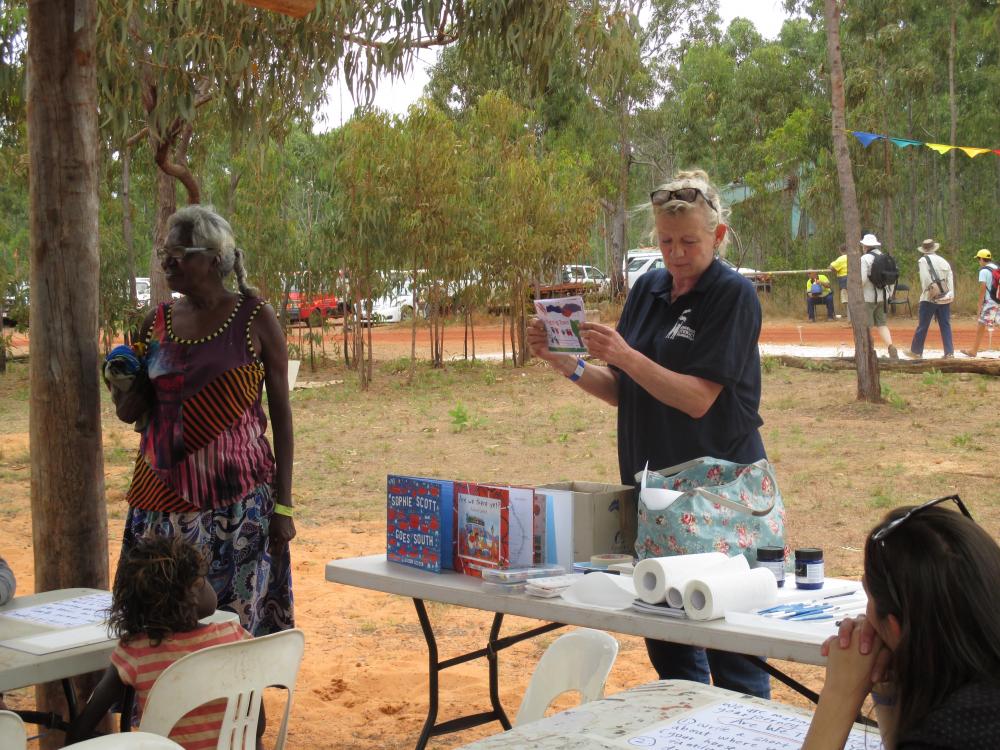 Alison Lester ran a series of story-writing workshops over three days with students from Yirrkala School as well as a number from interstate, encouraging them to paint, write and draw. Over the festival Alison and the students created two beautiful books:  My Place, Your Place and Ganbulapula Story.

My Place, Your Place is the children’s impressions of home and Garma. Ganbulapula Story is a dreamtime story told by Djalinda Yunupingu, as she had been told by her aunties.

Our Ambassador Felix Reibl had been scheduled to run music workshops but, despite criss-crossing the country at all hours, Felix Riebl was let down by his travel connections. Harry Angus, Felix’s band mate Cat Empire and Emily Lubitz from Tinpan Orange, very generously stood in.  On the second day of workshops Harry and Emily were joined by Shellie Morris, and the children took to the guitars, ukuleles and (especially) trumpets with enormous enthusiasm.

In his keynote speech at the opening of Garma, Djawa Yunupingu spoke a few phrases in Gumatj Matha, then said “It is a beautiful language, soft but strong. It matches and mirrors the rhythm and movement of the land.” His words resonated throughout the event.  Garma celebrated all the beauty of art, music and dancing of an ancient culture.

Back to all News & Events

Next: Journey to Tiwi Islands

“Thank you, you do an incredibly important job addressing the literacy gap in our communities. Thank you again for the opportunity to have these beautiful resources to engage our kids. ”

The Indigenous Literacy Foundation (ILF) acknowledges First Nations peoples and recognises their continuous connection to Country, community and culture. We pay our respects to Elders past, present and emerging, and honour the sharing of traditional stories passed down through generations. In particular, ILF acknowledges the Gadigal people of the Eora Nation, the Traditional Owners and Custodians of the lands on which our head office is based in Sydney.

The Indigenous Literacy Foundation further recognises the important role that language and storytelling have for culture and community, and the responsibilities that come with our work in these areas. If you notice any information you believe is inaccurate, please don't hesitate to contact us.

The Indigenous Literacy Foundation works as an initiative of the Australian Book Industry with the support of:

The Indigenous Literacy Foundation is registered with the ACNC and is a Public Benevolent Institution with DGR1 and TCC status. ABN 45 146 631 843.

Coded with love by MINDWIRE